Load files: What are they? And do we still need them?

Takeaway: Load files connect the data you see (PDFs, Word documents, emails, etc.) to behind-the-scenes ‘databases’ that you don’t see. You’ll need them when transferring eDiscovery productions between different applications, but they can be tricky to use. So, try to find eDiscovery software that can handle all kinds of load files.

Data is usually disorganized and in multiple formats (PDF, TIFF, MS Office, emails etc). Think of it as a shopping basket filled with apples, oranges, bananas and limes. A database, on the other hand, is very rigidly structured. You can’t just drop data anywhere you like in a database. Databases have specific slots, called ‘fields’, into which data is inserted. Just as you can’t put a square peg into a round hole, only corresponding pieces of data can enter the field. So, think of databases as a computer’s organized summary of a user’s disorganized data.

A load file is a specifically structured text file. It contains information that connects the things you see in a document and their corresponding slots in a database. Usually, the text in a load file is ‘computer speak’, but sometimes it’ll connect regular text. For example, when you scan a document, optical character recognition (OCR) converts the ‘image’ of the document into computer-readable text. A load file will connect the original image with the converted text.

Load files seem like gibberish to the average human user, but they’re very useful for a computer.

If you open a load file in a text editor, you may see a block of text like in the image below. This block contains crucial information about a document, and the block is repeated over and over again (with different data) until each file in your case has a block of its own. 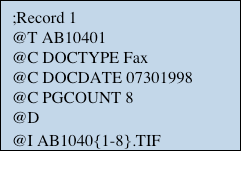 Load files are useful because they distribute information into different slots (or ‘fields’).

Load files are still very useful, but we don’t use them as much as we did a decade ago.

Technology has changed a lot since the early 2000s, and load files don’t lie at the centre of eDiscovery anymore.

Older databases were designed to deal with slow computers and limited storage space. Nowadays, with Cloud computing, speed and storage aren’t an issue anymore. So, databases have evolved. New NoSQL (pronounced ‘No Sequel’) databases are built to work without load files – which simplifies eDiscovery.

But we do still need load files when sharing productions.

You won’t need load files when using files in a particular eDiscovery application. But you’ll need them if your data has to move from one application to another. It turns out that they’re still the common language that all these applications speak. So, if opposing counsel doesn’t use the same eDiscovery software as you, they’ll need to send a load file along with their production.

Here are two important things you have to keep in mind when dealing with load files.

All load-file productions aren’t structured identically, which can make it hard for your software to use them. For example, sometimes they’ll have a main directory with a bunch of folders for load files, images, natives, and text files. At other times, these folders won’t sit in the main directory and will be part of multiple sub-directories instead. So, to decipher a load file’s data, your eDiscovery software will need to be able to process all these variations, automatically.

You can produce your files in 3 different ways:

Note: We’ve already written posts comparing native files vs PDFs and PDFs vs TIFFs, so do check those out.

As a rule of thumb, try to ask for ‘native’ load file productions.

Native files come with valuable metadata, so a native load file production will be the most useful. But if you can’t get one, here are your other choices, arranged from most to least desirable.

This post might have you thinking that load files are tricky to use. But that problem goes away if you get the right eDiscovery software.

For related posts about eDiscovery, check out the following links.